There is something really special about baking bread.  At it's most basic, bread is some kind of flour and water which is then baked.  But there are so many wonderful variations of bread, and so many ways in which we can not only bake it but also use it once it is baked.  Bread can be part of a feast, it's consumption can be part of a ritual or it's creation can be magic!

Whether we bake our own bread, use a mix or buy breads, they are often part of my magical path.  When I was first learning, I had 'cakes and ale' at pretty much any ritual I did, even just for myself.  If I could, I tried to get some nice pastry, to offer up and partake in as part of my rituals, along with a special (often alcoholic) drink.  But sometimes it was a few crackers and some water.  What was important to me is that it was food and drink, and the food typically was a bread like thing.

Often breads are created in specific shapes, and those shapes bear special meaning.  Hot Cross Buns were the first special bread I ever knew of (because of the nursery rhyme), but breads (and cookies, which are definitely like breads!) can be made into all kinds of fancy shapes.  They can look like other foods (like grains or vegetables), people (like gingerbread men), structures (like gingerbread houses) or animals (I made some very cute bunny rolls several years back for an Ostara ritual...sadly I can't find a picture of them). 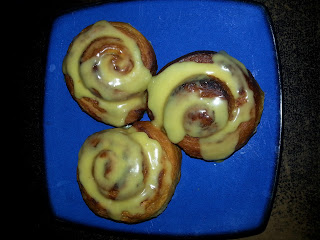 You can also make simple shapes and press or carve symbols into them.  I have done this with both salt dough and cookies.  Runes or other symbols could be used to infuse the dough with the energy of the symbol.  These could be used as offerings, or consumed (if the dough is edible) to bring that energy into yourself.  Symbols abound, and when you start looking for them, you will find them, as I did when I drew the spiral WomanRune, then realized that my breakfast that day was in the spiral shape! 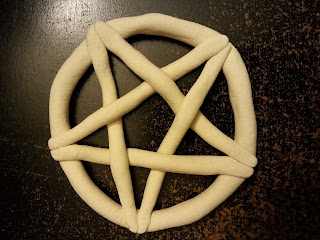 I love working with and playing with salt dough.  It is a really simple and easy way to create symbols of things you want to work with, or basic statues.  As it can be nothing more than salt, flour and water, it can be used as leave out offerings that won't be harmful (for an offering that doesn't need to last, you can actually omit the salt and just make a basic dough with flour and water...the salt helps keep it together if you want to keep your creations around).  Basic shapes, such as this pentacle are fairly simple to make, by just rolling the dough into long strands and pressing them into the shapes you want. 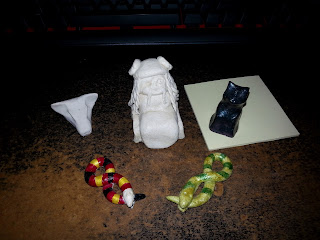 While an unfinished piece like that may eventually weaken and crumble, you can make your pieces last longer by sealing them.  You can use craft or hardware sealants, anything that will keep moisture out of them.  You can paint them before you seal them if you want them to have more color.  I sealed these ones with nail polish, the small Odin statue (which was a blast to make) is sealed with just clear nail polish, while the snakes I played with different colors (I really like the shimmer in some of the colors on the snakes).  The cat I kept a plain dark, since it is less detailed, I kind of liked just having it be monochromatic.  And the wolf head actually isn't salt dough, but clay (but since he was another small figure I've made for my altars, he was in this picture). 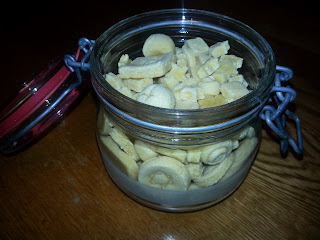 What I find really fun with dough is that you can add all kinds of things to them.  I have modified my salt dough with both coffee grounds and cornmeal.  It was definitely an experiment to get the consistency of the dough right, but I loved how they came out.  This is the cornmeal dough, which I made into small offering stones.  I cut most of them with tiny 'cookie cutters' that were originally meant for kids' playdough.  I used the same molds to press shapes into different ones.  And I made some spirals and simple round 'bun' shapes with X cut into them. 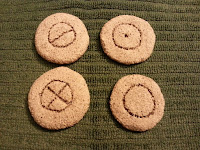 The ones I made with coffee grounds reminded me a little of concrete, because the grounds gave them a much rougher texture.  Salt dough, even without being sealed, will last for a very long time as long as you don't get it wet.  I made this set two (or three) years ago, and it is still hard and hasn't changed.  And they still smell a little like coffee!  I was having a hard time cutting the designs into this dough (because of the texture) so used a toothpick to poke the patterns in.  I thought it was neat that the outside got so light as it baked, but where I had poked the dough down, it stayed dark (and the bottoms, where they were resting on the pan stayed dark as well).

And whether you are making salt dough for ritual use or bread dough for eating, you can pick additives based on your purpose.  I love to add herbs to my dough when I am baking, and my pantry is full of choices.  Actually most of my magical herbs are kitchen herbs, so picking from the pantry isn't a new thing for me.

The bread making process has plenty of places to add a little extra magic.  I often give herbs (and sometimes salt) a bit of a grind in my mortar and pestle, especially if the herbs are quite large and I don't want such big chunks.  Grinding as well as kneading are times that I find perfect to chant and focus on infusing my work with my intentions.  If you are working with a dough that has to rise, you can use that time to charge the dough, either by placing your bowl on a sigil or other symbol, or covering it with a cloth that is appropriate (which could be laid over the cloth or paper you have covering the dough).

Bread is just such a versatile medium with which to work.  If you haven't tried your hand at it, I highly recommend it!  There are many simple recipes that you can try, and a basic salt dough can take just minutes to whip up (as it doesn't have any leavening, so no need to rise).  There is something really special about the transformation from ingredients to dough to finished product (whether that is a bread or a statue).