Making tools your own! 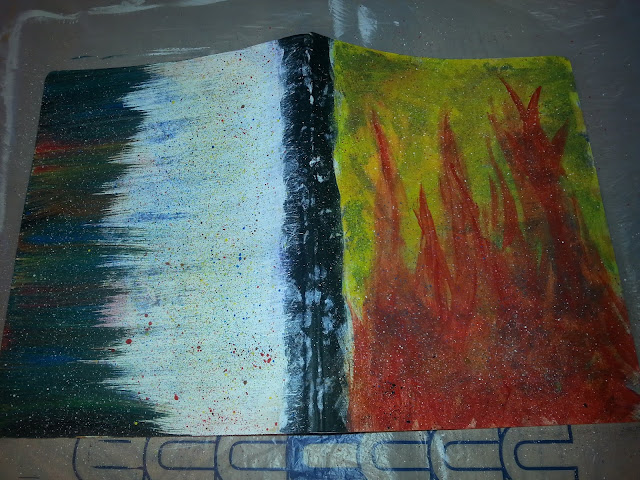 There are a lot of things we use in our practice, tools that help us to get into the right mind frame, focus our energies, record our thoughts, tap into the unknown, or any number of other things.  And there are a LOT of traditions and superstitions about many of these.

Things I have heard over the years:  Your Book of Shadows needs to be hand written!  You should make your own tools (including learning to forge your own blade).  You should be gifted tarot decks, not buy them.  You should never haggle over the price of a tool.  Your deck should be wrapped in silk and stored in a box.  Your crystals should be laid out to bask in the moonlight every full moon.  You should grow your own herbs.

Many of these traditions have good roots.  I know that writing the BoS by hand accomplishes two things:  firstly, hand writing things reinforces memory, and secondly, if someone malicious were to get a hold of your book, it won't have bits written by other people in it (so you can't incriminate someone else).  Other traditions I think made more sense in other times.  When people did more things themselves, it was no big deal to whittle your own wand and make your own clay cup (and even possibly work with the blacksmith to forge your own blade), but that's not always practical anymore.

One of the trends I am seeing lately that I am a big fan of is personal modifications.  I have seen a lot of scrapbook style Book of Shadows, and they are gorgeous!  The great thing about many of the ones I have seen is they don't require really any personal artistic talent, just access to a printer and crafting supplies.  You can find neat pages online, or even just art that fits the information you have, print out both your information and the art, and start cutting and pasting, adding in bits of additional fancy tape or ribbons, found feathers or dried plants, and you end up with something amazing!

If you feel more adventurous, you can totally add your own illustrations or art.  I took part in an intentional creativity project several years ago, where we made our own art books (in the picture above), and then had different projects throughout the year, each with it's own intention (it was magical art!) and process.  It was a lot of fun, and most of the projects didn't require a lot of artistic skill (either there was a really good tutorial, or it was more 'put color on the page to represent your anger' type of thing).

I recently joined a group that is dedicated to tarot (and divination) card alteration...and it's really cool.  I have a friend who removes a lot of the borders on her cards, and they look great.  Some of the people in this group also edge their decks (they color the cut edges to match or contrast the deck), and they look so pretty!

I think there is this fear, with magical tools, that if we do anything to them, we are somehow disrespecting them.  It's kind of like how we are taught to not write in books as children.  But if you look at historical books, some of them have notes, or doodles...and it's really special.  It's a glimpse into the mind of the person who read that book all those years ago.

This is how I think about making alterations to my tools.  Firstly, they are MY tools, and as long as I own them (the same way I might write in my own books, but never one I have borrowed from someone else), then changing them in any way I see fit is fine.  Secondly, I want them to fit my practice, so if there is something that I don't like about a tool or something I think that might work better, then why not adjust it!

Sometimes we definitely have to take a deep breath and let go of some things.  I haven't actually altered a deck yet...because I have sort of a thing about patterns.  Of the decks I have, most of them have an offset face (because of the border plus the name at the bottom), but a centered back that goes pretty much to the edge...so if I were to trim the border off the front, the back would now be offset...and I think that would bother me.

And some people may find the slight roughness, a bit of uneven cutting, or some ink bleeding (because many times when people edge decks, the ink bleeds a bit...or more) makes it look worse, but I kind of like it.  It's like the little imperfections that show up on pretty much every hand made thing.  To me, these speak of the love and energy that went into modifying or creating the thing.

A slightly off-topic thing that some people worry about, with modifications, is the resale value.  And yes, if you are planning on selling your books or decks (or other tools), and they are out of print or hard to come by, then modifying them can alter their value (almost always for the worse).  Again, personally, this is a non-factor for me.  For most things, once I own them, they belong to me.  I very rarely use things that I plan on rehoming later (and I never buy things as collector's items...just don't have the room/money!).  And frankly, if I am giving someone something that I used and altered, and they are unhappy with the alterations, they don't have to take it!

One thing that comes up also sometimes, when talking about alterations, is do the alterations change the original meaning of the thing....and does this become disrespectful.  This might apply if you are removing cards out of a deck (or altering the art on the cards), or if you find a statue you like, but want to alter it in some way (possibly changing which deity it represents).

I think this is something we each need to find our own comfort level on.  I personally don't tend to buy things that are original artworks, so when I buy a mass-produced or replica thing, I don't feel bad changing it up, even if I'm making some kind of extreme change.  I don't think I would alter original artwork...that I think would bother me (not saying it's wrong, I just think I wouldn't like to do it).  I don't have a problem altering statues (again, the mass-produced kind), to make them different.  I think that if I were changing the deity a statue represented, I might do a ritual to thank the original deity and to exchange that representation with the one I wanted.

There are a lot of ways we can alter our tools to make them our own.  Some of the alterations we may do might require us to do some soul searching, and decide if it is something we are comfortable with.  But there is also a lot of space for creativity, for taking something basic, or older, or simple and making something fabulous out of it!  Check in with your tools, see what might not quite be perfect for you....and figure out if there is something you can do to make it a better fit.  What you create might surprise you!
Posted by Kylara at 2:23 PM