I do a lot of work with symbols, and I find them to be not only really versatile but also with a depth of meaning that can be built up in layers.  But symbols have their weakness, and many times the more simple the symbol, the harder it can be to use them in ways that go beyond the obvious.

Symbols are mainly used in two ways:  they can be used in magic or writing to represent an idea or concept and they can be used as messages from the divine that we interpret.  The more fluent we are with the symbol, the more information we can gain from it when it pops up in our life (whether out in our daily life or as part of a divination system).  And the more different ways we can use the symbol in our practice and spell work.

Take for example the money symbol:  $.  When we see it, we think of money, often specifically of dollar bills.  If we were to start seeing this symbol repeatedly in our daily life, we may jump to the idea that money will be coming our way.  But money can also represent things like:  power, freedom, responsibility or fun.  And if we look at the symbol itself, we could see it as a snake and staff, a crossed through S or a broken infinity symbol.

The more you work with the symbols you use, the more different ways you can understand them.  I am a huge believer in the power of stories.  For me, learning the stories behind things help me remember them much easier.  So when I work with learning symbols, I am always looking for the story.  I want to know why a thing means what it means.  I want to learn all the interesting facts about a symbol. 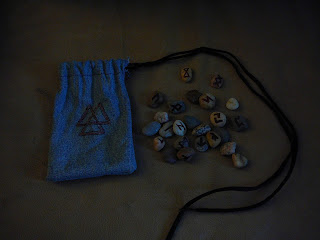 One of the first proper symbol sets I worked with was the Futhark Runes.  I actually learned them as an alphabet first, which I used for a lot of my early magical writing.  But then I started to learn the meanings of each of the runes, and they became a sort of magical shorthand.  Instead of spelling out the things I wanted to represent with runes, I would find runes that represented the ideas I wanted to call upon, and I would use those runes in my work.  At this point, my understanding of the runes was very rudimentary, I had a keyword for each one and that was about it.

It was many years before I began a true inquiry into the runes and their deeper meaning.  And once I did, I was hooked.  I started looking at some of the larger lists of correspondences for each rune, and some of them confused me.  I didn't understand, for example, why Fehu was known as 'Cattle' but represented wealth, or how Gebo represented both 'Gift' and exchange.  I also had a really hard time remembering the different rune names and which one meant which thing.

And that was because I was looking at their meanings as simply lists of ideas.  I wasn't connecting the ideas to the rune, and I definitely wasn't finding stories about the ideas.  Once I started looking at the shape of the rune symbol, and actually sitting down and journaling about what the shape looked like to me, what it might mean, and how that fit with the accepted meaning of the rune, that is when things started to come together.

Another thing that was really helpful to me was finding a couple of different sources where people shared their own stories about the runes.  Being able to read a short guided meditation about the rune, or read legends and folklore that was related to the runes helped me see the connections, so that now when I look at one of the rune symbols, I start thinking of different stories and ideas that are connected to them.  I still look things up, but now I am more likely to turn to my own notes and journal pages than a published book or website, because I have built up my own connections and reflections on the runes. 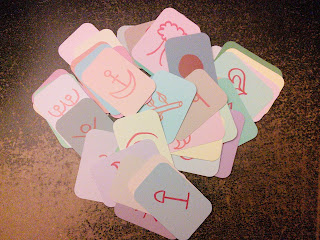 Last year I started working with the WomanRunes which is another rune system, though one that takes a more feminine perspective.  But much like the runes, the symbols themselves are quite simple, and they each have a basic keyword that they are associated with.  I really enjoyed them from the start, I like that there are some really great ideas represented with these runes (like Labor or Laughter).  But again, much like with the Futhark Runes, they really came alive for me once I had gone deep with them.  I took an immersion class, where I spent time with each rune, exploring them from my own perspective with journal and art prompts.  And even now, when I see other people share their experiences with the WomanRunes, I grow my understanding even more. 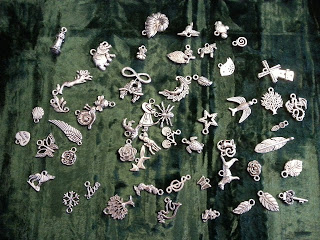 I just ordered a batch of charms, which I am using as the base for a Trinket oracle (which may actually stay a charm oracle, I kind of like the uniformity of having them all be charms).  I bought my batch blind and random (though I did request more nature/animal charms, and the seller was amazing in fulfilling that), so I am in the process of becoming familiar with the charms and what they might mean to me.  Some of the charms are simple and obvious.  There is a little spiral, the word 'love' and a bicycle.  But there are also several varieties of leaves and trees.  So I see a good bit of research in my future (which I am excited about....yes I'm one of those people who likes researching new things!)

But even with initial impressions, there are several charms that stand out.  There is an elephant charm, but it has sort of crazy eyes and big circles on it's body.  I immediately connected it with the pink elephants from Dumbo...so that charm could be the energy of elephant for me, but it could also be imagination/creativity, or even a small touch of insanity.  There is a mouse charm, and if you look really closely he's holding a tiny cookie.  So now it's not just a mouse, but also represents an endless cycle (or toddler logic..)

Each charm will have it's own stories, it is up to me to uncover them.  And then, when I work with them, to figure out which story fits the situation.  Because I am a firm believer that symbols can have multiple and sometimes contradictory meanings.  Just because a symbol is connected with both life and death doesn't mean that it means both at the same time.  I don't think that anything in life is absolutely one dimensional, we just need to look harder to find the other perspectives of some things. 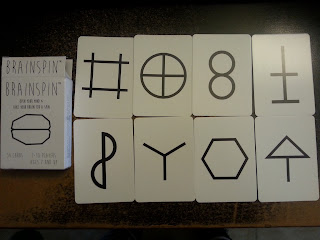 This past Yule a friend gave me a fascinating little game called Brainspin.  It comes with all these symbol cards, and the point of the game is to come up with as many things that the symbol on a card could represent in a limited amount of time.  It is really fun to play, not only to challenge yourself to break free from your first impressions (which is REALLY hard...especially since you know your on a time limit), but also to see what kind of connection other people come up with for the same symbol

But the process is a very useful tool.  You can apply the same principle to other symbols!  Give yourself a minute, and pick one symbol (whether it is a shape symbol like these ones or the runes or an item symbol like a turtle or an apple).  And then write down every thing that comes to your mind when you think/look at it.  Any connection you can come up with.  Perhaps Algiz looks like a chicken foot to you, or that 8 looks like a snowman.  A turtle could make you think of computer programing (wow am I showing my age....) or it could remind you of soup.

If you really want to go deeper, after you are done brainstorming, go through your list and journal about each thing.  Write about how it is connected to your original symbol, and what that might mean when you work with or receive the symbol.

I also find this journaling process really good for coming to a deeper and more personal understanding of traditional symbol meanings.  Sometimes, when I am having trouble making connections with a traditional meaning, I'll sit down and work it out on paper.  I may write out a couple of different ways that the meaning and the symbol could be connected.  It might mean that I have to put myself in someone else's shoes, and pretend that I am someone who sees the connection and am trying to explain it to someone else (me!) who doesn't quite get it.

What is really interesting about this process, is even if you don't ever make the connections yourself, even if the traditional meaning never clicks for you, by writing about it, you are more likely to remember it.  If you just want to remember traditional meanings, sometimes you can take the 'ridiculous story' approach.  To do this, come up with the craziest explanation for why something means what it does that you can imagine.  Seriously the stranger and more outlandish the better.  This is the power of stories, and why learning stories behind things helps forge stronger connections.  Because stories are interesting, and the more interesting the story, the more likely you are to remember it.

So, whether you are picking up a new symbol (or set of symbols!) or just wanting to deepen your connection with the symbols you already work with, remember to seek out the stories!  Delve into the stories that are out there, but don't be afraid to make your own stories.  The more stories you have connected to a symbol, the more it will become a deep and meaningful addition to your toolbox, and the easier it will be to use it in different situations.
Posted by Kylara at 9:51 AM