I'm not going to go into whether or not All Snakes Day is a thing or not.  Personally I'm firmly in the camp of, "If it's fun, then celebrate it!" but I also understand the desire to keep one's practice firmly founded in things that have historical basis.

However, I have a personal fondness for snakes.  I have always loved them, ever since I was a little girl.  I can't recall ever finding them disturbing, although I have had a healthy fear (still tinged with admiration and respect) at different times. 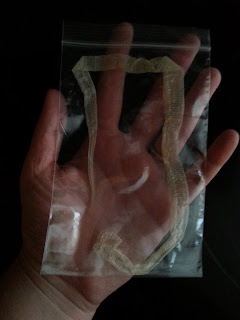 Snakes are often seen as a powerful symbol of transformation.  Snakes will shed their skin, and thus may seem to almost be 'made anew' when they do.  It is also a great metaphor for releasing what we have outgrown or old patterns.  Many times, a snake skin will be shed in a single piece, such as this one.

Shed skin such as this can be used as a tool or focus for personal transformation work.  Shedding skin is a natural process and doesn't harm the snake in any way.  If you know someone who has a snake, you can ask them if you can have one of their snake's sheds.  This skin came from our old pet snake, Bane.

You can also use pieces of shed skin as parts of spells to release parts of yourself that you no longer need.  It can be given back to the earth as part of a ritual to say good bye to the old you.


I definitely find snakes beautiful.  There are lots of really incredible looking snakes out there.  Their scale patterns and colors can help them blend in or mark them as dangerous predators.  Some also use their bright coloring as a disguise, pretending to be a poisonous cousin when they themselves are actually harmless.

You can call upon snake as a teacher to help you learn to blend in, so that you can remain unseen.  Or you could work with snake to keep people who would seek to harm you away by appearing more fearsome.  Snake is also a skilled predator, and if you are so inclined, you can seek out snake for advice on how to handle foes who won't leave you alone.

Many snakes produce poison, which they may use to help them catch prey or to defend themselves against predators.  One thing I find interesting about snake poison is that the treatment (antivenom) comes from the venom itself.  More specifically, much like we may get a flu shot to build up our antibodies against the flu, antivenom is produced by introducing non-lethal amounts of venom into a host, which then produces antibodies against it.

Magically speaking, I think it is a really great example of how a problem can contain it's own solution.  Often, when we are faced with a difficult situation, we look for a solution from the outside.  But sometimes the best solution requires using the problem itself.  Snake reminds us that we should look at all angles for the answer, not just the ones that we usually look at.

Other snakes use constriction as a way to capture their food.  A snake's spine is highly mobile, and much like a slinky, they can turn in about any way you can imagine.  Their body is one long muscle, and they twine themselves around their prey, holding them tight and squeezing.  Even when they aren't trying to constrict, a snake will wrap itself around things to hold on.  Our snake used to love to wrap himself around people's arms and fingers.

To me, constriction involves both patience and persistence.  It involves a level of focus that can be hard to maintain.  Movement often makes things easier, so holding something while applying pressure can be quite difficult.  But there are a lot of things that require this kind of focus, and often spell work calls for a very steady, constant attention and focus of will.

Another aspect of snake I was fascinated with when I was little was how they could unhinge their jaw to swallow their prey whole.  I remember seeing an exhibit on snakes when I was little, with the bones of the jaw unconnected to show how wide they could open.  Not only do they swallow food that is often much bigger than their head, they don't eat daily like most other animals, but eat huge meals and then spend weeks or months digesting them.

Snake is definitely one I would turn to if I feel I have 'bitten off more than I can chew'!  I think we all have the tendency to sometimes take on more than we should, and sometimes it may feel like we are drowning.  If you have ever watched a snake eat it's prey, it's not a quick thing.  They definitely strike quickly, but once their prey is disabled (through poison or constriction), they take their time in swallowing it.  Millimeter by millimeter, they stretch their jaw, working one side and then the other, just a little tiny bit more around their prey, until they are able to swallow it all.  We can approach our own projects in the same way:  bit by bit until it is done!

Snakes senses are quite different from our own.  Many snakes do not see very well, and without external ears much of their perception of sound is based on perceiving vibrations.  But they have an excellent sense of smell, and much like a cat they use an organ called the Jacobson's organ to taste scents.  Their tongue is used to pick up scents from the air and bring them over this organ.

You can work with snake to expand your own perception of the world around you.  Spend some time in meditation with snake, learning to experience the world as snake does.  How will this change of perspective help you in your own life?

Snake has always been a powerful predator to me.  And that is part of why I think I have been drawn to them.  There is a beauty to snake, and snake's world is a fascinating place, once you dip beneath the surface.  Work with snake, and make up your own mind!
Posted by Kylara at 12:46 PM