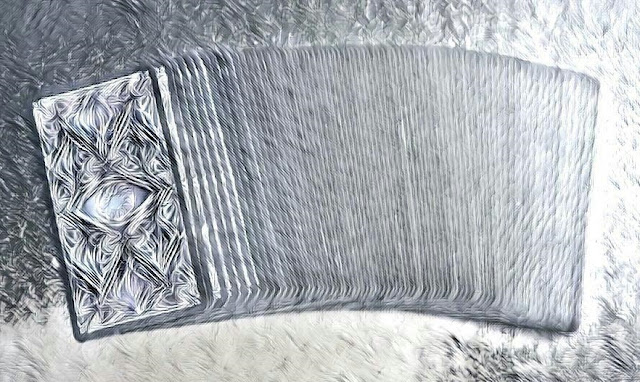 Some people think that we shouldn't read cards for ourselves, because there is a tendency to interpret the cards as we want them to be, and not as they are.  But I feel that this is a danger we face, whether we are the one doing the reading or not.

If you are pretty familiar with your cards, you probably have a good sense of what kinds of messages they give you.  So, when a card comes up that is saying something you don't want to hear, you might try to interpret it in a way that supports what you wish were true.  But this is the same as when someone else tells you what a card or reading means...you may argue with their interpretations, either out loud or deep inside.

We instinctively want to protect ourselves from things that push us outside of our comfort zone.  When we have an idea, or are set in our ways, we don't always want to change.  Or, on the opposite side, we may be very excited by whatever the new shiny is, and we don't want to hear that it might not be as cool as we think it is.

But, instead of staying clear of situations where we might be faced with these self-delusions (because that is what they are:  ways in which our mind is trying to convince us that what we think is the truth...ways in which it is trying to delude us), we can learn to become aware of them, and to use them to see more clearly what is actually going on.

I have always liked new things.  I definitely get satisfaction from acquiring new-to-me stuff.  Luckily, I am not a price/brand consumer...I like what I like and I get the same joy from a ten cent purchase as I do from a hundred dollar one (often more from the ten cent, because there is the added joy of finding a bargain!).  The one place where I often fall prey is 'limited time' offers.  If I want a thing, and I am told that it won't be available forever, I will find myself wanting it even more.  Worse, sometimes, I want things simply because they are limited (it's that old starvation mode kicking in:  if I don't get it now, I will never get it, and maybe someday I'll think I need it).

There is a lot of new technology that encourages this limited edition mentality.  Kickstarter is the one I use the most, and many Kickstarter projects are either exclusive (you can only get them if you back the project) or include exclusive bonuses (you get extra stuff if you back the project).  I find myself craving things that I might not have been interested in, if I had just seen them at a shop somewhere.

Sometimes I can just ask myself questions and sort it out:  would I want this if I knew it would always be available, do I want this more than I want similar products that are out in the market (and might be cheaper), do I only want this because it is exclusive (or includes exclusive bonuses)?  But other times, I really find myself torn...I keep coming back to a project and it seems really alluring to me, and even though logically I know it's pricey, that desire is still there.

There have been quite a few oracle/tarot decks that I've looked at on Kickstarter.  And recently one in particular that I kept thinking, not only "This is beautiful!" but also "This is a really good deal..."  And yet, it was also pretty pricey (because it had several add-on packs of cards that were still a good deal, but made the total jump up quite a bit).

So, I pulled out a deck, to do a reading, and see where my head was at.  Within a few cards, I knew it was going to be one of those readings where I was going to be trying to trick myself into thinking a certain way.  I lay cards for both options (buy the deck and don't buy the deck), and if I had been reading for someone else, I definitely would have suggested they not buy the deck.  But my mind kept trying to twist the cards around, trying to make my initial impressions of warning and discontent with reasons why those cards might mean something else.

Here's where it gets tricky.  Sometimes, those surface meanings are just smoke screens, and we have to seek out the deeper (often contradictory) meanings in order to find out the truth of the situation.  This is where I have learned to trust my emotions.  When I look at a card, and that first, obvious meaning hits...how do I feel about it?  If it is my mind trying to trick me, normally I get a sense of almost snide obviousness.  "Of course that card couldn't POSSIBLY mean what it looks like it means....let me see what else it could mean...oh yes, this is a thing it could mean."

But, when I look at the card and the obvious meaning just feels off, and slightly confusing, like I don't quite understand it (even though it is, as I said, obvious), then I find that to be an indication that I need to look for those deeper meanings, and really see what else is going on in the card.

I also find that the need to draw more cards, even though I have gotten a clear message about what I should be doing, is an indication that I'm trying to talk myself into or out of something.  Again, I can need more cards because something is truly unclear, but normally when this happens, I'm looking at the spread and several cards just aren't giving me much.  I need more cards to give me the context to understand the cards I have drawn.

When my mind is trying to trick me, I look at the cards I've laid out, and the message is screaming at me, but my mind is telling me, "No, that can't possibly be it.  Draw some more cards, ask again, try wording it different."  Basically, my mind is saying, "Keep drawing cards until you find the ones that say what I want you to hear."

What I find really interesting is that since I know what to look for, the signs that my mind is trying to mislead me become messages themselves.  In the reading I was doing about whether I should back the Kickstarter deck or just wait and possibly buy a similar deck (this was an animal themed deck) that was already in print (I have one that is on my 'to buy' list already...plus others I have been contemplating), I kept wanting to avoid the cards that were telling me to wait, and to keep drawing cards, trying to find some way to justify buying the deck.  And the more I felt my mind skitter away from cards, trying to not look at them, and just wanting to lay more and more cards, the more I knew with certainty that I didn't actually want this deck.

It's not perfect, I still find myself second-guessing, and when I see the reminder pop up about the deck (since it's in it's last hours, I get email reminders), I feel that urge, the need to run and back it before it goes away.  But the anxiousness of not being sure isn't there.  I can let that urge go, because I am confidant in my interpretation of the cards....partially because of all the tricks my mind tried to play on me, to get me to interpret the cards in the way it wanted..instead of actually seeing what was there.

Reading cards is definitely an art.  Each card has layers and layers of meaning.  And the reader (whether it is you or someone else) adds their perspective, as well as the person for whom the cards are being read (and the relationship between the two).  Navigating all of that nuance is what make reading such a personal act.  And sometimes it's not even about the cards or what comes up.  My reading yesterday could have had pretty much any cards show up, and I would have still come to the same conclusion...because I know how to read myself reading the cards...because I know how to lean into the aversions.
Posted by Kylara at 1:30 PM