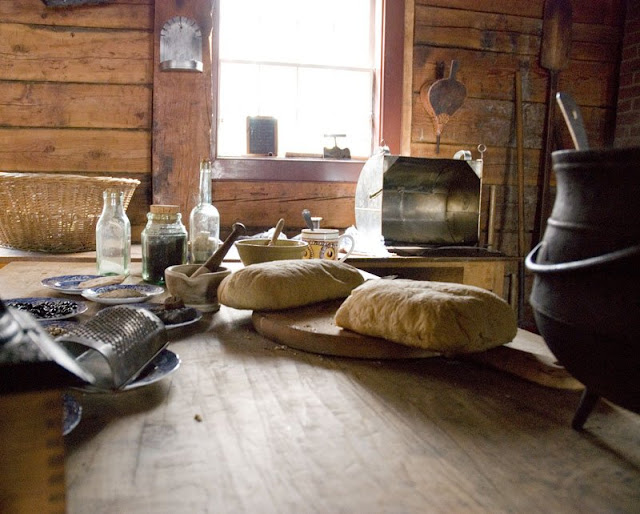 One of the common comments I see, when talking to other's about their spiritual and magical practice, is that they can't afford all the things.  And this makes me sad, on two levels.  I am a very "Ooh look at the lovely stuff!" person.  I adore all the pretty ritual tools, the fancy ingredients and the elaborate rituals.  I definitely don't practice like this.  I do have some gorgeous tools...but I also have no problem working with whatever I happen to have on hand.  And I think that there is a lot of wisdom in using what you have.

I've written before about practicing Thrifty Magic, and talked a bit about how to be thrifty in your practice.  But today I want to talk a little more about how our ancestors might have practiced.  I definitely think that there were people practicing at all wealth levels, from the nobles down to the poorest of the poor.  And it only makes sense that people used what they had.

One of the things that really drew me into this realm of spirituality was the level of personal involvement.  I don't need to attend a temple and find a priest to practice.  I am my own Priest/ess, and wherever I am is my temple.  I love the idea that I am doing, in my own way, something that my ancestors (of the heart if not of the blood) did, many generations in the past.

There is something very cool about the idea of every person being able to have a relationship with divinity, or with the Gods that they choose to work with.  And, along those same lines, I love that folk magic takes these lofty ideals of magic and uses them in ways that normal people would use.

I sort of think of this as everyday magic, or peasant magic.  It's not the type of thing that a priest/ess in a formal temple would do as part of a religious ceremony, nor is it the type of thing even that the villagers would do at a seasonal ritual (although both of those are great in their own way!), but the stuff that commoners would do, through the course of their normal days.

And if you think about it, some of the existing texts, the spells and rituals that were written down or passed down in story, sound exotic to us, but these might be things that were commonplace in another time.

Instructions might include that you should harvest your own herbs, to show that you didn't need to buy fancy herbs from far away, but the ones that grew in your garden or the forest near your home would be perfectly fine.  Many of the suggestions for time of harvest might be based on very practical things that we just aren't familiar with anymore.  Picking herbs in the evening, they would be dry from the day's sun and not yet covered in the night's dew, so possibly better for drying.  Some flowers open and close with the sun's light, so might be seen as more magically potent for different purposes depending on whether they were harvested open or closed.

Even the tools we use in our practice, can be distilled down to common things that were used in the house already.  The cauldron was the big soup pot, that could be hung over the fire to slow cook stew all day, and would also be great for brewing up salves, medicines and potions.  The broom would sweep the floors and getting that dirt out would brighten the energy of the house.

Things that are purely ritual now, might have their origins in more practical use.  The Witch's ladder comes to mind:  a string on which significant objects are tied and hung for various purposes.  But this is very similar to the way that herbs or even game, was hung for storage.  When we banish, we are often told to bury something in the earth or release it into running water.  If you think in terms of sickness, things buried in the ground not only get transmuted into nutrients, but they are removed from the sight and scent of both animals and people, so less likely to be tampered with or to bother the people living nearby.  Running water would literally carry the thing being banished away from you, again, an excellent precaution if there was sickness involved.

To me, there is something really elegant in taking ordinary things, things that you use for regular purposes, and using them to create magic.  It really underlines the belief that the magic comes from us, that we create the magic (as opposed to the magic coming from the crystal or the tool).

When you really think about why people turned to magic, it was to solve problems.  They either wanted something or wanted something to go away.  They used magic to give the world a push, but I feel like many things were taken at face value, in a matter of fact way that we have lost.  We understand so much more now, so things that were assumed to be true, in days gone by, we now shroud in mysticism.  We see our actions more as symbolic, with the true work being done energetically, and we tend to want to make things feel more magical.  It's like we can't really believe that they will work if they are too simple, too ordinary.

But I don't think the magic, the universe or any of it, cares if we use fancy woo-woo methods or simple, ordinary ones.  I've said it many times before, and probably will many more to come, but we need to trust that what works for us...works!

And it is okay if multiple things work.  If you can do ritual with all the bells and whistles, but you can also do ritual by tracing a circle in the dirt with your finger, do either of them work any less?  I can bake bread that uses four, very simple ingredients, and I can also make bread that needs fancy ingredients and involves a dozen steps.  Both will fill my belly, and isn't that the whole point?

So, if you ever find yourself thinking that you can't do something, because you found a version of it that requires things you don't have (or things that you can't do), ask yourself what is the core point.  What is the ritual trying to accomplish.  And what other way can you reach that same goal.  It's not about how you get there, it's about where you are going!
Posted by Kylara at 4:24 PM