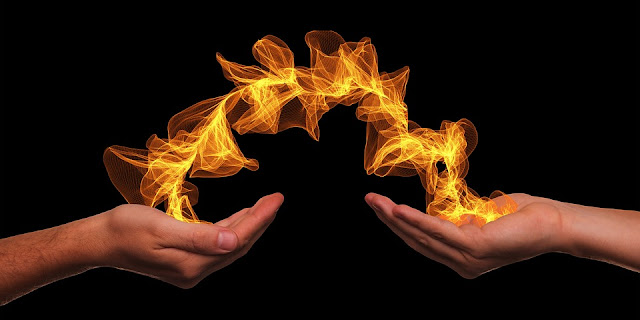 It is Halloween, which sort of marks the start of gifting season.  Pretty much, from here to at least February feels like one gifting holiday after another (for me, it lasts until May, because of birthdays and anniversary!).  Now, don't get me wrong, I adore gifting.  But I think we have lost some of the spirit of gifting.

And it's not a sliding scale either.  It doesn't matter if you only have one dollar to your name and the other person is a millionaire.  If they give you a gift that has a retail value of a hundred dollars and you spend your last dollar to buy a set of colored pencils and then spend a hundred hours drawing them a picture, many people will still value the more expensive gift more.

I like the meaning of the Futhark rune Gebo when it comes to the idea of gifting.  That the 'gift' is an exchange.  I have talked before about how I don't think there is such a thing as truly selfless giving, and I still believe this.  But I think there is absolutely such a thing as heartfelt giving.  And that is what giving should be:  felt in the heart.

When we gift, even if the gift isn't being reciprocated, or is anonymous, we are sending out energy.  And there is energy being received!  This might be a thank you, it might mean catching a glimpse of the person using the thing they were gifted, or even our own visualization of how a stranger might appreciate our gift.  Part of what makes gifting so special is that feeling we get when we truly give from our heart.

Now, you might remember that I mentioned Halloween as the start of gifting season.  I think that we have lost sight of what gifting means in many areas of our lives, because we are taught to expect being given things.  I think Halloween illustrates this really well.

Many of the roots of trick-or-treating have a much more direct exchange in the gifting.  Children would offer to pray for the house, or show them a 'trick' (recite a poem, sing a song, perform a skit) in exchange for their treat.  Now, this isn't something that we do today, but in a way you could consider the child's costume and their pure joy of the holiday their trick being offered when they ring your bell and ask for a treat.  You can always tell the ones that are really into it, the ones who delight in putting on the costume, whether it is a store bought one or handmade.  And those are typically the ones who don't even look at what they get in response, they are just happy with the whole process.

Christmas is another gifting holiday that has become so commercial.  My favorite example of the bad spirit of Christmas is Dudley from Harry Potter, who gets upset because he has one less present for his birthday (yes I know it's not Christmas, but the same idea) than the previous year, and throws a fit, even though is father explains that some of this year's presents are bigger.  I don't think that gifting should be a competition, either with each other or with previous gifts.

I like to think of gifting as sending a message.  What is my gift saying to them?  I have always tried to find gifts that I think someone would really like.  It's not about me, it's about what would delight them.  Part of my joy in gifting is finding something that really makes the other person light up.

Gifts don't have to be physical things either.  We can gift other people with many things that don't cost us a dime.  We just have to look at someone else, and think about what we would want, if we were them.  If you know someone who is always busy, and never has time, they would probably appreciate a gift of service:  helping them take care of some kind of task.  Many older people really appreciate gifts of companionship:  taking the time to really visit with them.

One important thing, when contemplating gifts, is to remember to separate your own desires from what you honestly think the other person would like.  And this can be hard, especially if you get really excited about things!  I constantly have to remember that, while hubby and I share a lot of common interests, we approach those interests in different ways, so I have to make sure that I'm not looking for gifts that are more aligned with my own tastes instead of his.

On the flip side, when we receive a gift, especially from a child, we need to think about how the gift is being given.  Children are very good at giving from their hearts, but they also tend to give gifts that they would love.  They often haven't quite figured out how to see things from other people's perspectives yet.  And it can be heart-breaking when they give something, especially when they are very excited about it, and it isn't received with the same joy.

But this applies to everyone, not just children.  When you receive a gift, especially if perhaps you were expecting something different, or if the gift isn't quite to your tastes, think about what the other person is trying to say with their gift.

I have received my share of 'not my thing' type of gifts.  Family is especially notorious for gifting you what you think they need or what they want you to want.  And that last one is particularly tricky.  Because they love you, and they often think they know, better than you do, what is best for you.  So they try to give you what they think you should want, instead of what you actually want.  And again, their feelings get hurt if you aren't properly appreciative.

I think the bottom line, when it comes to gifting, whether you are giving or receiving is to remember that it is an exchange and a message both.  Gifting is a conversation, and you have to look beyond the surface, and see what lies underneath.  Whichever side you are on, it may fall on you to make that stretch, to see the gift in the light it was intended.

But when you do, when you start to experience that exchange as one heart speaking to another, the rewards are so much more than the stuff that is being given.  Gifting becomes a true spiritual act, and receiving a gift is a blessing...no matter what the gift itself actually is.
Posted by Kylara at 5:07 PM