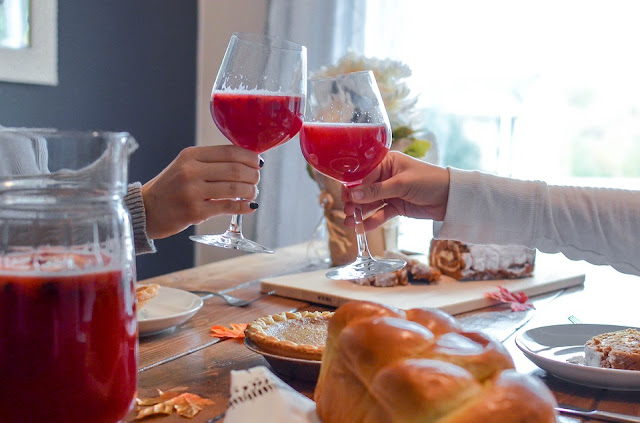 Let me start out by saying, that no matter how cute I think the name Friendsgiving is, I also kind of actively dislike it.  I think it sets a bad precedent for prioritizing families during the holidays.  Now, as I've said before, I am blessed to have good relationships with not only my own family, but also with my in-laws.  Holidays were never bad for me (no matter how much we may joke about wishing we could just stay home and lounge about in our pajamas....we really didn't mind doing family holiday dinners).

But not everyone is that lucky.  Some people just don't get along with their family.  Perhaps family doesn't approve of your religion, your partner, your life choices...or who you fundamentally are (orientation etc...).  Some people aren't invited to family holiday events, while others are invited, but know that if they go, they will really feel bad before the night is over as they will get nothing but attacks, both subtle and overt.

I did a little looking into the whole Friendsgiving thing, after having the stray thought that maybe it came from the tv show Friends.  Well, that may be why it gained in popularity, but it is believed to have been around a while before that.  The basic idea is that the friends weren't able (or wanting) to go home for Thanksgiving, so they did their own dinner.

Now, like I said, I love parts of this.  I love that friends bond together, celebrate holidays and create family.  But I don't think it needs it's own designation.  I think holidays are meant for more than family, and I think that chosen family (which is your very dear friends, you know which ones, the ones who you actually love being around, all the time, the ones you want to share everything with) can mean more to many people than their actual relations.

Of course, I am not saying turn your back on your family.  But if it's not healthy for you to be around them, then don't!  I don't care if it's Thanksgiving, Christmas or your Great-grandmother's 100th birthday.....if you are diminished or hurt by spending time with your family, then don't do that to yourself.  You don't owe them anything.

Thanksgiving itself has a fair amount of controversy these days (of course, what holiday doesn't anymore???).  The whitewashing of the origins of the holiday leaves a bad taste in many people's mouths.  So, I do understand the idea of trying to remove yourself from the name and any associations with it.

But, what is the true heart of the holiday, as we celebrate it today?  It is giving thanks, for the wonderful things in our live, and sharing a meal with people who make our lives better...or at least that's what it means in my mind.

And who you invite to your Thanksgiving meal is your business!  Ask yourself who are the people who enrich you?  Who brings you joy, and who do you want to be around?  Those are the people you should invite!

While we're at it, let's reclaim the dinner too!  It has become sort of a running joke that people can't just be with each other anymore, they have to be on their phones or devices.  With Thanksgiving, so many stores have taking the whole Black Friday thing and blown it out of proportion (I swear, I won't go on a whole rant....I promise....I'll just say it's Black FRIDAY, not "Black whenever-we-want-we're-just-calling-it-this-to-get-you-in-the-door-stuff-isn't-even-really-on-sale").

We stopped going to Black Friday sales quite a few years back.  We came to the realization that it just wasn't worth it.  The amount we saved wasn't worth the time invested, let alone having to deal with crazy shoppers!  But, if you enjoy Black Friday stuff, then enjoy it!  Just don't let it ruin other engagements because you are so caught up in the fever.

It's okay to unplug now and then.  The world isn't going to come crashing down if you don't see that text right away, or don't check your social media every five minutes.  You won't ruin your year if you miss one sale.  If you are going to spend time with people who you care about, especially for a dinner to honor what we are grateful for, let's really tune in and be present.

You know, this thought could apply to so many things, not just holidays, and not just Thanksgiving.  We are so busy, so much is going on, all the time, but we need to set aside times where we can unwind.  Where we can just BE, with the people who bring us joy.  Where there is no agenda, nothing to get done.

Find the things that you love doing, and share them with people who also love doing them.  Don't worry about what people might say.  If you wanna have friends over to watch a sports game, have at it!  If you wanna play board or video games with your peeps....game on!  If you wanna just chill with some music, rock on!  Maybe you just wanna have snacks and talk all night....do it!

Let's stop trying to do what we think we 'should' be doing, especially around the holidays.  It's not about trying to recreate those Hallmark moments (which are totally photo-shopped anyways....), holidays are about celebrating life.  And you need to celebrate YOUR life, in whatever form it may take.  Celebrate the things that make your life better, the things that make your life uniquely yours.  And if someone else doesn't like it, that's really none of your business, so just let it go.
Posted by Kylara at 5:03 PM