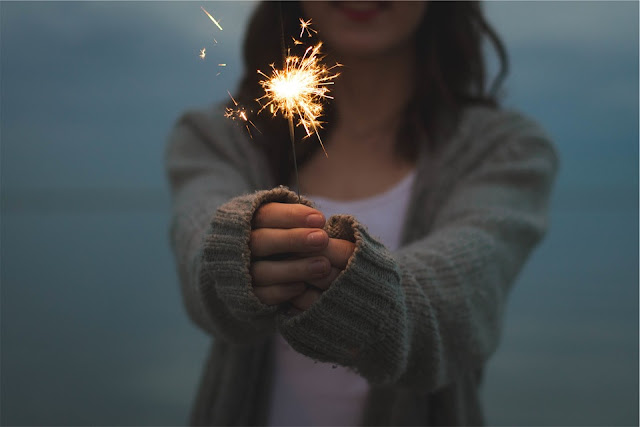 With Chinese New Year just passed, this will be the third new year I've observed this 'year'!  The start of the new year is something that is honored in many cultures and practices around the globe and throughout time, and yet when exactly it occurs is something that varies widely.

In my personal practice I tend to think of 4 different 'new years'.  There is the calendar new year, falling on January 1, then Pagan new year (Samhain), Chinese new year, and my personal new year (birthday).  Recognizing another cycle of our earth around the sun is something that I find useful, as it gives me time to reflect.

I'm not a huge new year person.  I never really got all worked up for the new year.  I didn't dive in deep with resolutions or throw huge parties (though I have attended some!) or watch the big shows (I always thought it was a little odd to watch the countdown in other time zones).  But I have my own traditions for the new years, and each one ends up being a little different.

Probably the one I do the most for is calendar new year.  Since I do personal planning, calendar new year is when I swap calendars (obviously lol).  This often means that the way I approach the year will be different.  Last year I was using two planners, one dedicated to magic and the other was a Bullet Journal style planner.  My medium term planning was more intense last year:  I had to draw out pages for every month and week.  I tracked my progress in more things.  I planned more (by the moon phases, by the week and by the month!).  This year, I'm more tuned into my feelings with my planning, and I am taking things more day by day.  And this focus, which will shape my whole year.

I also set my year long focus for the calendar new year.  This is something I started to do several years back, when I realized that I wanted to direct my spiritual growth more.  I picked one thing (though a big thing) to focus on for a year.   Spreading it out over a year gave me time to really explore it, and also to integrate it more than a shorter course of study.  I enjoyed it so much, I have kept doing it, naming my years (my Year of Magic or Year of Runes).

Now, when it comes to Pagan new year, it took me a while to come around to this one.  I knew that many considered Samhain the pagan new year (if I remember correctly, this view is based on the Celtic calendar).  Since there is no Sabbat on the calendar new year, it makes a sort of sense that the Wheel would have one of the Sabbats as it's turning point.

I didn't really resonate with why it was Samhain until quite recently, and it was because of a fiction book.  In this book, there was a culture that believed that their 'dead rode with them until the long snows' (they were a horse based culture).  So, anyone who died during the year was basically still hanging around, until winter came.  And there was a ceremony they held to say goodbye to the dead as they journeyed beyond the snows.

This spoke so much to me of Samhain, and about how we honor the dead who passed during the year.  And I really like the idea of marking the changing of the year based on when the dead pass further along their journey.

For my local group, this is our one big ritual of the year:  Day of the Dead.  If we are only going to do one ritual, this will be it.  So it is the time when I get to see people who I may not see for the rest of the year, my extended Pagan family.  It feels very celebratory for me.  I like that it is at Samhain that we get together.

I don't celebrate Chinese new year as much as I'd like.  Even when I was little, we would get red envelopes sent from my grandparents, but rarely did much otherwise.  I love the little traditions though.  The idea of eating long noodles to represent long life.  I am half-Chinese, but I have always loved what little I have known of Chinese traditions.  It is something that I intend to explore more.

And then there is my birthday.  I'm not really a birthday person, in the sense that I don't expect a big fuss.  Often, we don't do anything super special on my actual date of birth (we celebrate holidays loosely in my house, depending on work schedules and things like that....we would rather be able to relax and enjoy something than try to get it on 'the right date').  And since we married on my birthday, it's a kind of double celebration for us (which I both like and don't like...it has it's pros and cons!).

I've never really stressed so much about getting older.  When I was young, it was definitely cool to be older, but I wasn't in a real rush.  And now that I am older, I'm not freaking out about having turned 40 or the grey hair that I have.

I do find it a little interesting that we talk about our age (or don't talk about our age lol), but we don't really think of our life in cyclical terms, like we do calendar years.  I think my absolute favorite way to think about years of my life is in gamer terms!  I saw this while searching for birthday meme's to wish a friend a happy birthday, and I fell in love with the idea.  "Instead of saying that I'm 30 years old, I'm going to start saying I'm a 30th level adventurer!"

And really, if you think about it, you aren't just an adventurer (though life is certainly an adventure!).  I am a level 40 human, but I am a level 22 Pagan/witch, and like a level 34 student (because I never stopped learning!).  This also makes me a level 19 wife (will hit 20 this year!), and a level 18 mother.  It's amusing to think about it this way, but I also think it's really thought provoking.  Every time someone asks me how long I've been doing something, and I actually count up the years, I am taken aback by how long it has been!

There are cycles within cycles throughout our lives.  We live in multiple worlds all at once, and so it is only natural that we have multiple starts to each 'new year'.  And there is nothing wrong with celebrating and honoring each in it's own way!  When you think about the different parts of your life, you may find that you want to honor a turning of the year for certain ones.  You can decide when that 'new year' will begin for you, and how you want to celebrate it!  And that is one thing that makes life so amazing...it is completely customizable!
Posted by Kylara at 6:24 PM