Sabbat Gods that aren't yours... 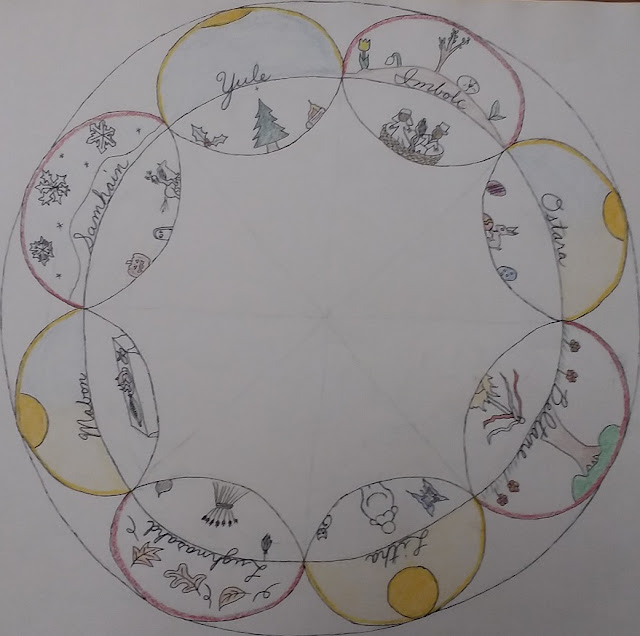 Like many Pagans, I enjoy celebrating the eight Sabbats throughout the year.  There are many, many ways to honor the Sabbats, whether you want to focus on the physical changes in the world outside your window, the symbolic seasons as they fall neatly into this eight-sectioned wheel, one of the mythic cycles (the Oak and Holly King, the Lord and Lady's story, etc...) or the psychological cycle of creation, destruction and resting.

But as you start reading about the different Sabbats, one thing you may encounter early on is the strong associations with many of the individual Sabbats and particular deities.  Yule is associated with Odin, La Befana, the Oak and Holly Kings.  Imbolc is Brigid's day.  Ostara connects to Eostre, Persephone/Demeter and Freyja.  Beltane belongs to the Horned God or Greenman.  Litha is claimed by any number of Sun deities (take your pick!).  Lughnasahd takes it's name from Lugh, and Mabon...is Mabon!  Samhain represents death and the underworld deities:  Hel, Hecate, Baba Yaga, the Morrigan.

Looking at this list of deities, they come from many different paths and traditions, many different pantheons.  And many practicing Pagans focus on a single pantheon, or draw mainly from a particular pantheon (with select other deities making an appearance in their practice).  It is also perfectly valid to be a practicing Pagan/Witch and not work with deities at all!

Which leaves many people in a bit of a predicament.  They want to honor and celebrate the Sabbats, but there is this strong connection to a deity that they may not personally work with.  Of course, you can work around this, either by focusing on the non-deity specific cycles, or by looking within your own pantheon and gods and finding the ones that really speak to you for each Sabbat.

But many people also celebrate Sabbats as their main time to connect to the greater Pagan community.  Public (or semi-private) rituals may work with the more well known Sabbat connections and deities, and you might be faced with the choice of working outside your own deities or not attending the ritual.

I personally really enjoy taking part in rituals where I am introduced to practices and deities that aren't mine.  I love when the people I know share their practices with me, and introduce me to deities that I may not be familiar with.  I often think of it like being taken to someone's favorite restaurant.  It might not be food that I have ever had before, but for one night I can try something new.  I may never go back to it, or it may become one of my new favorite places.  Even if I find it really not to my taste, I can sit and enjoy the company (and politely decline to eat lol).

This gets a bit trickier if you are doing your own rituals, and you want to work with deities that you only work with around Sabbats.  It can feel a little strange and possibly uncomfortable, like you are inviting a stranger into your house.  But I think that this can be a really interesting experience too.

I don't personally work with Lugh, Mabon or Eostre outside of Sabbats, but I do call on them for my Sabbat rituals.  Brigid is slowly making her way into my larger practice, though I wouldn't consider her one of my primary deities.  The really nice thing I find, about keeping my Sabbat practice focused on particular deities, even if they aren't ones I work with during the rest of the year, is that each year that I come back to them, I find my connection a little bit deeper.  Kind of like a distant uncle that you only see at the once a year family reunion, but each time you see him, you learn one more thing about him, and slowly he becomes more than just 'Uncle Joe'.

I very much connect to deities through their stories, and I connect to Sabbat energy through stories as well, so for me, looking into the myths of the season works very well.  It allows me to connect the deities to the celebration.  It gives me structure for my own rituals, as well as insight into how I might work with the deities in the stories, even if it is for only one night.

I think sometimes we feel like we need to completely understand a deity before working with them, but this isn't my experience.  I have worked with deities that I know very little about.  I find that it is through working with them that I come to know them.  But, the less I know about a deity, whether it is through book research, hearing stories from people I know or my own personal experiences, more I give and the less I ask for.  Most of the time, my Sabbat rituals don't involve personal work at all, at least not in the 'help me with X problem' kind.  My celebrations focus more on "this is where I'm at right now, and here is what I want to honor about this place."

I've said it before, but I'll say it again, because it bears repeating.  I don't feel like there is a 'wrong' way to practice, only what doesn't work for you.  So, as you approach Sabbat celebrations, don't be afraid to reach out to a deity you might not have worked with before.  Make an offering and be open to the experience, and over the years, you may find that you develop a relationship, even if you only work on it one day a year.
Posted by Kylara at 2:32 PM