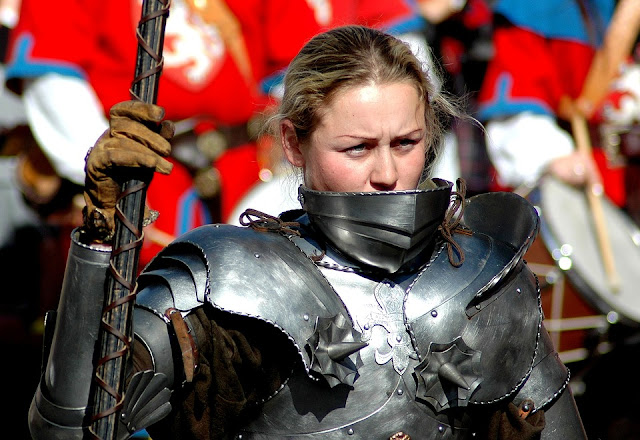 I had this idea about writing about woman warriors in the aftermath of Women's day, as well as in light of a lot of things that are going on in the world today...and as I was looking for a picture to use, another reason immediately became apparent:    women warriors are held to completely different standards!

Search for a picture of a 'woman warrior' and the vast majority will be model skinny women, in skimpy clothing, holding weapons in a sexy pose.  Now, I like sexy women warriors.  I've always been pro sexy armors and clothing for women in video games (but I'm also for sexy clothing and armors for male characters...and for conservative options for both...variety!).  This comes from my own personal perspective and desires:  I view sexuality as a strength, and I like portraying myself in a sexy way (even in virtual space).

But I do find that the idea of women warriors ends up a bit skewed, because it's like a woman who is a warrior isn't a 'real' fighter, she's just there to look pretty.  ((random aside:  there was an absolutely brilliant trend on social media a while back about female scientists and how they were 'distracting in the workplace' and the flood of responses of pictures of female scientists in their 'distractingly sexy' work wear was just awesome))

I think a part of it is that we tie so many things into the concept of gender and being a warrior is seen as a very masculine thing.  It confuses people that women can be warriors, and if you put them in regular (aka: realistic) armor, it confuses people even more.  I've actually heard people say "but then how do you know they are a woman?" which I find sort of hilarious.  It reminds me of the scene in Lord of the Rings, where the Eowyn kills the witch king (because 'no man can kill him')...and of course no one knew she was a woman in her armor...but she was still every bit as effective!  Her being a woman had absolutely no bearing on her being a warrior.

Myths and legends have tons of stories about women warriors.  And it makes me sad now that little girls (and little boys) growing up today don't have these kinds of stories of female strength to look up to.  We have taken the women warriors out of the stories, and left them with only very specific ideas about what a woman can and should be.

But women warriors are more than just fighters.  One woman who comes immediately to mind, when I think of women warriors is Malala.  She fights with words and actions, but not as a literal fighter.  There are so many women warriors in our world, who fight with the tools at hand.  And we talk of them as survivors (which they often are), but they truly are warriors.

There is a fallacy in the idea that being a warrior means being violent.  Even when you are a literal fighter, knowing how and when to fight is part of being a warrior....as well as knowing when not to fight.  There are many different ways to approach a confrontation, and a warrior doesn't always rush in weapon first (that is a berserker....big difference!)

I have always found it sort of strange that being a fighter as a man is considered the peak of manliness, but when a woman does the same things she is accused of being overly emotional or hysterical.  Even if she was only defending herself from worse violence.

And that, to me, is the saddest thing about this.  That we are a place in history where anyone needs to train as a warrior in order to just live their own life.  I keep thinking that we should be more civilized than this.  But the world proves otherwise.  There are many places where people, both men and women, know that just by being who they are, their lives are in danger anytime they leave their house (or even at home).  And stereotypically, women are at a higher risk, and are less likely to have been taught to fight back.

We need to reclaim the image of the woman warrior!  We need to find her stories, and tell them loud and proud.  We need to teach our daughters to be warriors, and to fight for what they know in their heart of hearts to be true.  We need to teach our sons also to be warriors, and to fight for justice for all.  We need to see women warriors in all their faces, whether they fight with words, with silence or with their words.  And we need to respect other women warriors, even if they fight in a way that we don't...because their battles are their own, and you can never know what someone has truly been through.

The more we build women warriors up, the more supported they will be, when they fight.  The less people they will have to face.  The more backup they will have.  Every time a woman warrior steps up, another person sees her, sees her strength and her power, and the harder it is for those who pray on the weak to find targets.  And this is the way we change how things work in this world.  By recognizing the woman warriors and all the work they are doing in this world.
Posted by Kylara at 6:12 PM