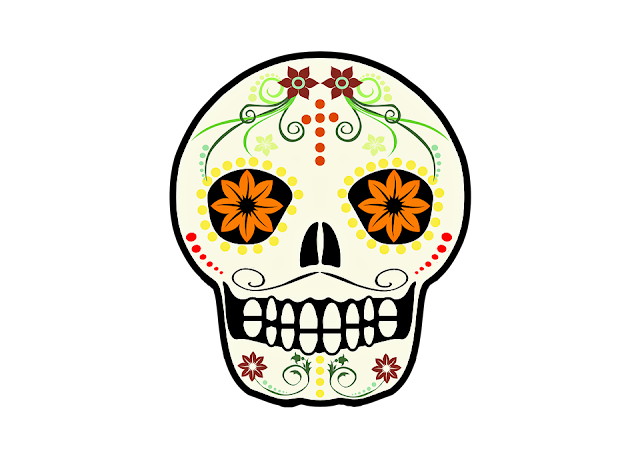 We are fast approaching Samhain, and in full on Halloween season (I swear, once that calendar tipped to October, my Facebook feed was swarmed with Halloween themed memes!), and for many of us it is a time to delight in the dark and spooky.  But for others, these things are scary or disturbing, and not comfortable to work with.

There are many reasons why we find things scary.  We may have false-impressions, and associate benign things with their scarier cousins (like how daddy-long-legged spiders and black widows are sometimes treated the same), or we may have strong memories of something (like watching a scary movie as a child and now that one thing is seared into your brain), or it may just be an unconscious fear (something we shy away from, but aren't sure why).

There are levels of fear as well, both healthy and harmful.  The way we react to fear is often tied into our level of fear.  If we aren't very scared of something, we may get a surge of adrenaline, but if we are absolutely terrified of a thing it could freeze us in place, or cause us to loose our mind in panic...neither of which is a useful reaction!  We might also be lacking a fear response to a reasonable fear, and this could cause us to be reckless (like how little children haven't learned yet that the stove is hot, so they touch it and get burned).

For many of us, working through fear is part of our practice, and we want to come to know our fears so that they help us instead of hindering us.  If you are at an extreme level of fear, you may need to ease into the work, or work with a support system (people you trust to keep you safe when you aren't able to think properly).  How we work through fear is a very individual thing.  Some people need to ease into it, facing their fear in tiny ways until they can manage that and then going a bit further, while others find that it takes a big shock to open their eyes.

Fear is something that children often struggle with, and sometimes they are forced to deal with big issues (like sickness or death) that are extra scary to them because they don't have the experience or frame of reference to mitigate the fear factor.  But, there are lots of ways to soften ideas, so they are more palatable to children, and often these same methods work really well for adults trying to work through a deep fear.

Symbols are great, because symbols allow us to deal indirectly with things.  Take the skull picture at the top.  This is several layers of symbols all in one!  The skull itself represents death, something that can be quite scary for lots of people.  This skull has been rendered in a cartoon form, so it is stylized and less 'real'.  Think about the number of kids cartoons that have skulls or skeletons in them.  A child can watch the cartoon and not get freaked out, but if they saw a realistic skull in a tv show they might have nightmares about it.  On top of being a cartoon, this skull is decorated in the sugar skull fashion:  with bright colors and flowers and other pretty imagery.  This makes it even less disturbing, and is a pretty common tool for helping people deal with things that are scary to them.  You can go even further, and make skulls out of sugar, decorating them with bright colored frosting (or make skull shaped cookies and decorate them with frosting), and now the once scary image is associated with something delightful!

As a Pagan, I work with my shadow side regularly.  I have always been someone who goes poking around in the dark, who makes friends with their fears.  I learned early on that other people didn't always like to do this!  When I am working on my own, I can do things in whatever way I want, but I also work with a group, and when working with a group, you have to consider the comfort level of all involved.

Now, this isn't to say you can't do deep work with a group, but if you are going to be dealing with topics that might be fearful or disturbing to people, you need to let them know!  Samhain is coming up, and my local group does a Day of the Dead ritual.  My friends and I run the ritual, and we also have an ancestor table set up, where people can bring representations of their dead loved ones, who will be honored.

Being Samhain, death is a big topic.  It is a bigger (for us!) ritual, so we don't always know all the people attending super well, so we don't do a lot of really intense stuff, but we often share memories and talk about our dead.  It can be highly emotional!  We do let people know the rough idea of what will go on, so if it's not something they are comfortable with, they don't get an unpleasant surprise.

This year, we are opening up the afternoon as a child-friendly time (previous years it's been adult only).  So we have been brainstorming ideas that still touch on the main concept (of honoring our beloved dead), but in ways that aren't going to traumatize the littles.  So less skulls and more butterflies (who are seen by some cultures as messengers to the dead).

Even as someone who likes the scary stuff, I enjoy working with other versions of things.  I find that by looking at both the serious and the more symbolic side of things I get a more complex image of it.  By searching out the humor, that layers on even more meaning.  If you only look at something one way, you miss out on so much!

Live has a lot of big, scary stuff going on.  And sometimes we can't avoid it, no matter how much we like.  Things happen and we are left struggling to figure out how to make it through.  Learning how to make scary stuff more digestible is a skill that will serve you well, not only in your own practice, but also when working with others.  Sometimes you need to approach things sideways, and when you do you find you end up much closer than you could get trying to push straight through.
Posted by Kylara at 11:34 AM